If you’ve been wondering why the State government hasn’t delivered its seven year old promise to protect Macedon Ranges Shire, wonder no more.

Macedon Ranges is a RURAL shire with State level significance: its resources, features and values are important to all of Victoria.

According to the Department of Sustainability and Environment’s housing and population growth projections (Victoria In Future, 2004), Macedon Ranges Shire will be one of the fastest growing exurban [rural fringe] areas in Victoria over the next 30 years (i.e. until 2031).  Here’s what VIF says:

About Victoria In Future Growth Projections

DSE’s population and housing growth projections are based upon an area’s population growth over the past 10 years, and building approvals in the past 3 years: VIF growth figures represent future growth rates if nothing changes.

“The meeting calls upon Council to not accept the growth scenarios in Victoria In Future and the Bendigo growth corridor plans, and to so advise the State government.”

Click here for a more detailed table comparison of Victoria In Future projections. 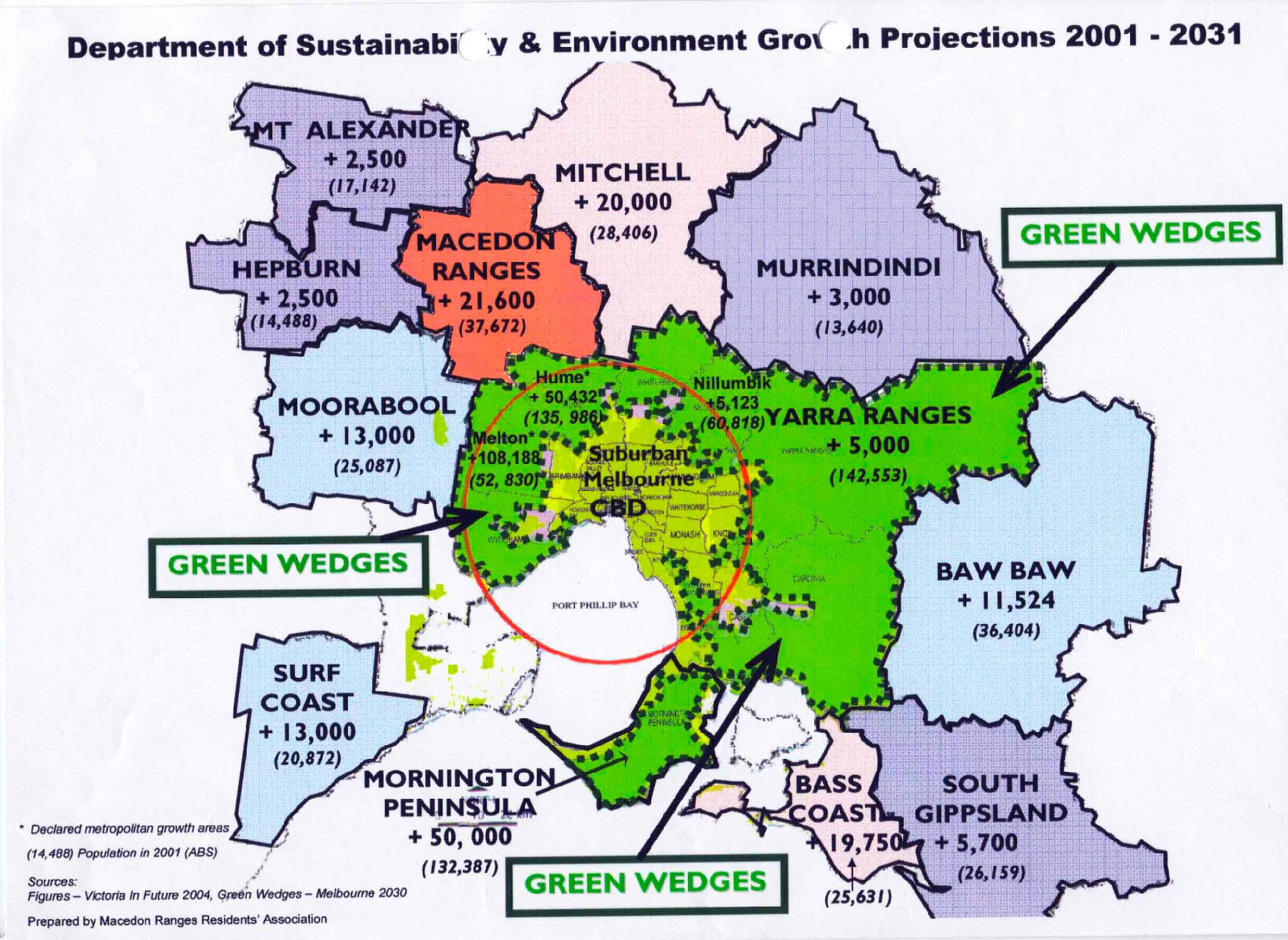 Macedon Ranges:  The Next Suburb Of Melbourne

Map 1 shows that Macedon Ranges Shire – which has no Green Wedge or any other State level protection – is closer to Melbourne CBD than most areas that are protected by Green Wedges.

Those Green Wedges are diverting metropolitan development towards Macedon Ranges, an area of State significance, which is clearly intended to soak up development pushed out of Melbourne by the Green Wedges.

While the State government refuses to provide planning protection, the framework for suburbia is silently being put in place.  Here are some of the reasons why we think that way:

Melbourne Water’s boundaries now extend outside the metropolitan area and into Macedon Ranges.  Our Shire is low on water and Western Water is connecting the southern section of Macedon Ranges Shire (the parts closest to Melbourne) to Melbourne’s water supplies.  This will support suburban growth.

The State government has announced seven towns in Macedon Ranges Shire will be connected to natural gas, which will support both residential and industrial growth.  These towns are in the southern section of the Shire (the parts closest to Melbourne).  This will support suburban growth.

The recent Electoral Representation Review forced upon Macedon Ranges by the State government came up with and approved 3 new wards for Council elections.   The South Ward (Gisborne and Mt. Macedon) has significantly fewer voters than the West and East Wards.  The East Ward has fewer voters than the West Ward.  The South and East Wards include those parts of Macedon Ranges Shire that are closest to Melbourne.  The uneven distribution of voters between the three wards provides scope for substantial growth in the southern section of Macedon Ranges Shire (the parts closest to Melbourne) without triggering an unscheduled review of ward boundaries.  This will support suburban growth.

In 2005, growth figures being used to prepare an Outline Development Plan for Gisborne:

The Gisborne ODP Project is funded by the State government.

Although the Macedon Ranges’ community was not consulted about Melbourne 2030, and has still not been consulted and has yet to see any plans for the Bendigo corridor, we understand the Bendigo plan is based on Victoria In Future growth projections.

The 2004 brief for the Corridor Plan project identifies Macedon and Mount Macedon, Lancefield, Tylden and Malmsbury as ‘urban centres’, and includes Tylden and Lancefield when neither are located on the defined transport corridor.

Macedon Ranges Shire is the only State significant area affected by a ‘growth corridor’.

Say NO To Suburbia Noticeboard